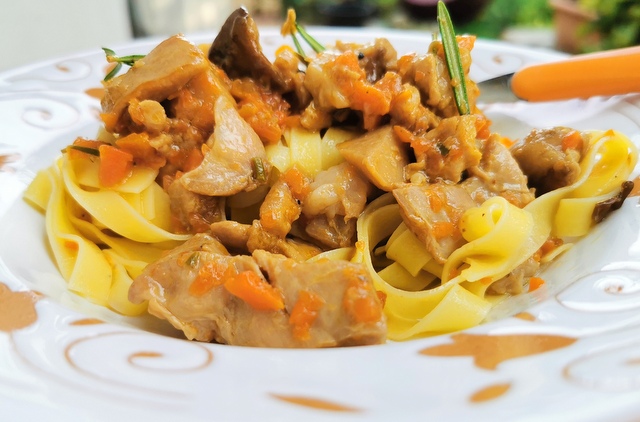 Another recipe from ‘The Classic Pasta Cookbook’ by Giuliano Hazan. This time, rabbit tagliatelle. The recipe suggests parpadelle instead which we didn’t have however tagliatelle is still ribbons and worked just as well.

I came across some rabbit reduced in Sainsburys – worth keeping your eye out for. This recipe does take quite a long time however great for the weekend.

3) Stir in the rabbit, rosemary and juniper berries and cook until the meat is starting to brown – 5-10 minutes

5) After about 2 minutes when the alcohol has bubbled away, add the tomatoes and season well. When the tomatoes begin to bubble, cover and turn the heat right down

6) Cook for an hour until the rabbit has become tender. If the liquid evaporates then add a little water

Foodie Tip – Rabbit can be quite tough so the longer you can cook it the better, keep tasting little chunks of rabbit to make sure the meat is tender enough

7) Once the sauce is cooked cook the pasta, drain well and toss with the sauce, the remaining butter and the parmesan.

Leftovers? I was only cooking this for me and my boyfriend so there was loads left over. I tossed half of the sauce with the pasta and used the other half in a rabbit hotpot later that week – scrummy!